Occupy song & happy melody to sing & dance for peaceful and creative protest. In solidarity to the Occupy-Movement, and to the worldwide potesters and the Blockupy protest in Frankfurt at 1th of June 2013, which was prohibit by the german police / Interior Minister Boris Rhein (CDU).

Intro:
Occupy is a worldwide protest movement against social and economic inequality. The claim is, that large corporations and the global financial system control the world in a way that benefits a minority and undermines democracy. So the primary goal is, to change the economic structure and power relations in society into something more fair.
Based on http://en.wikipedia.org/wiki/Occupy_movement

occupy:
pacifism, criticism, activism, pluralism
humanity, solidarity, democracy, harmony
we are peaceful, we are careful, we are helpful, we are hopeful 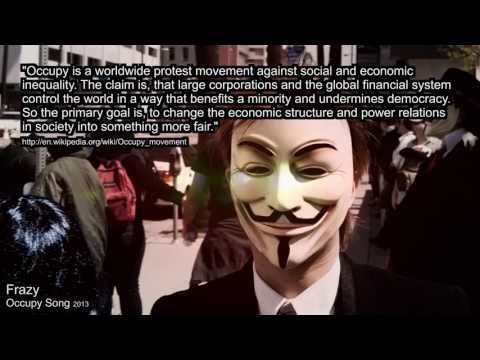 To be english friendly, songs which have english lyrics from now on will be published by "Frazy", not by "Synapsenkitzler".

Copyright by Synapsenkitzler. Except:
All Photos from occupy protests from all over the world are under Creative Commons-licensed content for commercial use, adaptation, modification or building upon from flickr.com. For detail credits check XXXXXXXXXXXXXflickr-album.
Guy Fawkes Mask Info: http://en.wikipedia.org/wiki/Guy_Fawkes_mask

I watched the eye-opening documentary "Goldman Sachs - Eine Bank lenkt die Welt" (english: Goldman Sachs - A bank controls the world) on tv-Station ARTE. So i include a chapter about Goldman Sachs in the occupy song. The short conclusion of the mowie is, that former Goldman Sachs manager and consultants get jobs like United States Secretary of the Treasury, President of the European Central Bank, Governor of the Bank of Canada, Prime Minister of Italy, President of the European Central Bank and so on *. And then Goldman Sachs benefits of their decisions and activities. You can find the video (71 minutes, german, french, hopefully english subtitles) using this google search link

What you can do for a better world

Do sustainable lifestlye and ethical consumerism. Use ethical banking to place your money.